How Do Predatory Payday Loans Work? 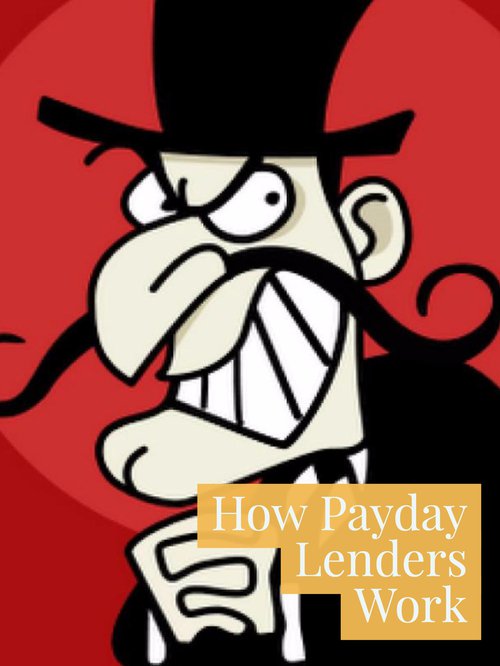 I am a Bankruptcy Attorney in Ventura. This GREAT article just appeared in the NY Times:

In 2003, Tonya Burke was living in North Carolina with her two children when she got into financial trouble. She had fallen $500 behind on her rent and utilities, and neither of her boys’ fathers was able to chip in. Then she needed to take time off from work when her younger son, who was only 8 months old, had to have emergency intestinal surgery. After his recovery, she started working for $11 an hour as a secretary, “but my paychecks weren’t enough to cover the back bills and the new ones too,” she says. “I was at a point in my life where I didn’t want to ask anyone else for help.” There was a payday lender across the street from her office. “It seemed like a good solution.”

Even though North Carolina made payday lending illegal in 2001, five lenders got around the law by affiliating with out-of-state banks to offer short-term, high-interest loans. So Burke was able to walk into a storefront owned by Nationwide Budget Finance and leave with a cashier’s check for $600. When the loan came due on her next payday, however, she couldn’t pay it and immediately began to fall behind on the fees. So she took out another loan to cover the first one. And then took out another to cover that one — and then another and another. Eventually she wound up with seven loans, each for only hundreds of dollars, but with annual interest rates of 300 to 500 percent. It wasn’t long before the lenders started calling, she says, threatening with jail if she couldn’t make her payments.

Woried for herself and her children, Burke eventually found her way to Carlene McNulty, a consumer rights lawyer at the North Carolina Justice Center. McNulty had heard about many cases of people who found themselves buried under the fees of payday loans. “Our Legislature said: ‘Payday lending is harmful to consumers. Get out of North Carolina!’ ” she told me. “But they were still here, just as if the law had never changed.”

Payday loans are often advertised as a short-term lift that helps keep the lights on or allows you to stay in school. But borrowers often become trapped in a debt spiral. According to a new report from the Consumer Financial Protection Bureau, the government’s financial watchdog, about 50 percent of initial payday loans play out into a string of 10 or more. “One could readily conclude that the business model of the payday industry depends on people becoming stuck in these loans for the long term,” the C.F.P.B.’s report said.

McNulty wanted to go to court on behalf of Burke and tens of thousands of other payday victims, but she faced an unusually thorny challenge. The fine print on the loan agreements barred recipients from participating in class-action suits. Of course, many businesses try to protect themselves from these suits, which they argue can amount to extortion for minor sins. And by forcing every dispute into individual arbitration, companies can avoid many lawsuits in areas like misleading credit-card offers or sex discrimination. “It’s like a get-out-of-jail-free card for the company,” McNulty says. In part, this is because few poor or middle-class customers take up the offer to arbitrate a dispute. The awards are generally capped, and the amounts are too low to make it worth a lawyer’s time or fee.

But class-action lawsuits can be a powerful tool for reform. And so, suing the payday lenders under the state’s unfair-trade-practice and usury laws, McNulty challenged the class-action bans. She proceeded with five class-action cases, one against each of five major lenders still offering payday loans in North Carolina. The state courts allowed the cases to go forward, ruling that consumers weren’t aware that they were signing away their rights and that there weren’t enough lawyers willing to take individual cases to arbitration. By early 2011, three lenders settled for $37.5 million. The North Carolina attorney general shut down the remaining payday lenders.

Getting rid of predatory lenders was a victory for the citizens of North Carolina, but the larger question of the right of companies to limit customers’ ability to sue for bad practices has not been rectified. In April 2011, the Supreme Court ruled on a case similar to McNulty’s class-action suits, AT&T Mobility v. Concepcion, which was named for the lead plaintiffs, Vincent and Liza Concepcion, who signed a standard AT&T cellphone contract that, in the fine print, forced dissatisfied consumers into individual arbitration. As in North Carolina, a lower court ruled that AT&T’s bar on class-action lawsuits was unjust under California law. But Justice Antonin Scalia, writing for a 5-4 majority, cited a 1925 federal law, the Federal Arbitration Act, and reversed the decision. The text of the law was clear, Scalia said — it “was designed to promote arbitration,” and states couldn’t get in the way. Judith Resnik, a professor at Yale Law School, told me that Scalia’s interpretation was “in no way consistent with what we know Congress was doing in 1925.” Back then, “arbitration was negotiated between merchants, not imposed by merchants on their customers and employees.” Nevertheless, at least 139 class-action lawsuits have been thrown out by courts, according to the nonprofit group Public Citizen. Burke’s suit, which was against one of the lenders who had not settled, was dismissed in February.

Andrew Pincus, a partner at the firm Mayer Brown, which helped win the Concepcion case for AT&T, suggested that the availability of arbitration has a net economic benefit. Arbitration is cheaper, faster and more efficient for companies and consumers alike. Anyway, he said, it’s the job of the C.F.P.B. to address the “relatively few legitimate claims of widespread improper conduct.” And that’s partly true. Since its creation in 2011, the C.F.P.B. has brought 40 actions against deceptive practices in the financial industry, reaping $3.1 billion for 9.6 million consumers. At the same time the agency has also recognized the importance of class-action lawsuits, highlighting a series of recent cases in which 13 million consumers received more than $350 million in payments and debt relief.

But the tilt toward arbitration, no matter how much more efficient it may be, suggests that the balance of power has changed between companies and their customers. It has become harder and harder for ordinary people with legal problems to get into court and stay there. “This is all about access to justice,” Arthur R. Miller, a law professor at New York University, says. “In a way it’s part of a class struggle. We are privatizing justice to the point the rich can afford it and every one else can’t.” Only the Supreme Court can reverse one of its rulings, but Concepcion is based on a statute, which Congress can change. Senator Al Franken, of Minnesota, introduced a bill to bar mandatory arbitration, and even if Congress stalemates, the C.F.P.B. has the power to issue its own regulations on some arbitration claims.

That payday loan or credit card that seems too good to be true? The C.F.P.B. could get you back into court to challenge it, along with everyone who went for the deal. At the moment, though, the agency will say only that it’s considering its options. Burke, meanwhile, still has problems with her credit rating, which dogged her when she tried to buy a car and take out a mortgage. The payday lenders are now lobbying to get back into North Carolina.