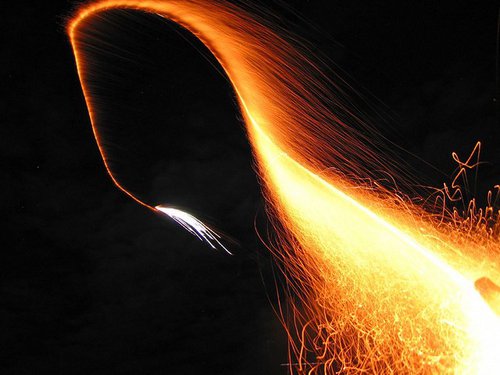 Normally, I like to use this space for items of general interest. However, this was just too bizarre of a headline to pass up:

Lawsuit: Defendant Breached a Duty Not to Shoot Bottle Rockets Out of His Anus

From a complaint filed on January 23 in West Virginia, reported today by Courthouse News Service:

8. [Defendant] was highly intoxicated on this date and time, and decided in his drunken stupor that it would be a good idea to shoot bottle rockets out of his anus on the [Alpha Tau Omega fraternity] deck, located on the back of the ATO house.

10. [Defendant] placed a bottle rocket in his anus [and] ignited the fuse, but instead of launching, the bottle rocket blew up in Defendant’s rectum, and this startled plaintiff and caused him to jump back, at which time he fell off of the ATO deck, and he became lodged between the deck and an air conditioner unit adjacent to the deck.

13. Per the applicable codes … the deck in question should have had a railing, which comported with said codes.

16. ATO owed plaintiff a duty to provide a safe deck, including a railing, and … a duty to supervise its guests and its own fraternity members, such as Defendant, and other under age persons, from consuming alcohol on its premises, which leads to stupid and dangerous activities, such as shooting bottle rockets out of one’s own anus.

18. [Defendant] also owed plaintiff … a duty of care not to drink under age, or to file bottle rockets out of his anus.

19. [Defendant] breached this duty when he both drank under age … and attempted to fire a bottle rocket out of his anus while under the influence. The act of firing a bottle rocket, within Huntington City Limits, was also a crime.

22. Plaintiff asserts that the activity of underaged drinking and firing bottle rockets out of one’s own anus constitutes an “ultra-hazardous” activity which exposes both of these defendant to strict liability.